Catalytic synthesis of liquid fuel from solids or gases is making a comeback both on decentralised small-scale and big refinery-sized plants. Michael Gross reports

In the 20th century, synthetic fuel has often been the last resort used by countries cut off from global oil supplies for one reason or another.

While gasoline was never quite expensive enough to make the synthetic alternative attractive in the global marketplace, isolated countries ranging from Germany to South Africa used synthesis on a massive scale.

As soon as the Nazis seized power in Germany in 1933, they made the development of large-scale fuel synthesis from coal a national priority. It was a typical example of dual use science. Officially, the fuel was for the rapidly growing number of cars on the new Autobahn, which helped to pull the economy out of the crisis, but without it, Hitler’s wars would not have been possible either.

To turn the country’s abundant coal into liquid fuel, there were two methods to choose from:

• Catalytic hydration of coal at high pressure was based on the work of Friedrich Bergius, who won the Nobel prize for chemistry for his high pressure work in 1931.

• The conversion of the coal feedstock into synthesis gas (CO + H2), which is then turned into liquid fuel at atmospheric or moderate pressure using a cobalt catalyst or at intermediate high pressures using an iron catalyst. This method, which can also start from gas feedstocks, was invented by Franz Fischer and Hans Tropsch in 1925.

IG Farben boss Carl Bosch, having witnessed the spread of gasoline-fuelled cars in the US, was keen to make synthetic fuel his company’s next blockbuster product after the success of the nitrogen fertilisers from the Haber-Bosch process. From April 1927, IG’s plant at Leuna in Germany started producing fuel using the Bergius process. Shortly after that, however, the discovery of the Oklahoma oil fields eliminated all hopes of ever making the so called ‘Leunabenzin’ competitive in the market, and Leuna remained the only plant producing it.

In December 1933, the Nazis, keen to make Germany independent of oil imports, made a contract or Benzin-Vertrag with IG Farben, guaranteeing the company a fixed price in exchange for a minimal production of 200t/year of fuel. Although a small amount today, this was 10% of Germany’s total fuel consumption at that time.

This was just the first step. The following year, the government forced the companies mining lignite – brown coal – to invest in coal hydration plants, strategically located deep in the middle of the country. Three hydration plants and one Fischer- Tropsch plant took up production in 1936. By 1939, there were half a dozen of them.

In 1943, in the middle of the war, Germany produced nearly 6.2m t of oil, half of it by catalytic hydration. Another 368,000t was produced using the Fischer-Tropsch synthesis. Only in May 1944 did the Allies start bombing these factories.

After the war, the German Democratic Republic (GDR) continued to turn its abundant lignite supplies into fuel, using both the Bergius and the Fischer- Tropsch processes. In South Africa, the company Sasol used Fischer-Tropsch catalysis to convert both coal and gas into various petroleum products, opening its first coal-to-liquid plant in 1955. It became a global petrochemical company after successfully expanding its operations to Qatar, Iran, and Nigeria.

Today, several companies have revived the Fischer- Tropsch process for entirely different reasons, mainly to do with using new, climate-friendly feedstocks, such as biomass and ‘stranded’ gas. Choren Industries – the name implies it uses C, H, O from RENewable sources – has built on engineering expertise from GDR times to adapt the Fischer-Tropsch method to the use of biomass as feedstock. Fuel expert Bodo Wolf founded the company in 1990, building on experience gained in the GDR’s research programme aimed at converting the abundant lignite into fuel. Shell helped to develop the process used to convert the synthesis gas into diesel fuel, by a variant of the established Fischer-Tropsch procedure using cobalt catalysts.

Currently, Choren is beginning production of synthesis gas at its Beta plant at Freiberg, Saxony, Germany. Fuel production, with an annual capacity of 15,000t of biomass-to-liquid (BTL), is scheduled to start in early 2010. Provided the necessary industrial policy legislation is in place, the Choren Group is planning to build a large industrial-scale BTL production plant in Schwedt in the state of Brandenburg. The feedstock for this plant, around 1m t of dry wood matter annually, will be sourced from recycled and forest wood, and increasingly from woody crops.

Another company adapting the Fischer-Tropsch technology is Oxford Catalysts, a spin-out from the chemistry department at Oxford University. It has developed a new way of producing metal catalysts, the organic matrix combustion (OMX) method, which ensures a narrower particle size range than conventional methods. This method is applicable to the production of metal catalysts for a range of different processes, including cobalt catalysts for Fischer-Tropsch synthesis.

In the OMX method, the metal salt forms a complex with an organic component that serves to stabilise the metal. On rapid combustion, as the metal cores are separate from each other and don’t have time to sinter, nanocrystallites are produced with a tightly controlled size range and a terraced surface, both highly desirable features for catalysis.

The young company champions a decentralised approach with a larger number of facilities operating on a much smaller scale. Its Fischer-Tropsch catalysts are to be used in special microchannel reactors developed by its subsidiary Velocys.

Microchannel reactors are made up of individual modules, each just 0.6 x 0.6 x 0.6m in size and capable of producing more than 25 barrels/day of liquid fuel. In the modules the key process steps take place in parallel arrays of microchannels, each with diameters ranging from 0.1 to 5mm. Plant size can be increased by simply adding additional modules, which greatly reduces both capital and operating costs.

Derek Atkinson, business development director at Oxford Catalysts explains: ‘The FT microchannel reactor provides a new way to make the production of next generation biofuels at a local scale workable and economically feasible, while avoiding the need to transport waste to large centralised production facilities and reducing the amount of waste going to landfill.’ With this approach, the large scale flaring of ‘stranded’ natural gas, for example, at oil production sites, could also be abolished, as gas could be turned into transportable liquids.

Oxford Catalysts plans to deploy a number of commercial-scale demonstration units during 2009 and 2010, in preparation for full commercialisation planned for 2011.

In recent years, the Fischer-Tropsch process has also experienced a renaissance on a large industrial scale, especially in places where supplies of natural gas from oil fields exceeds local demand and cannot be transported economically. This is the case for the Emirate of Qatar, which hosts 14% of the world’s known natural gas reserves, and a growing number of Fischer-Tropsch plants.

Sasol, which has been using Fischer-Tropsch to convert coal to diesel fuel in South Africa since 1955, set up a 34,000 bbl/day gas-to-liquid (GTL) plant at Ras Laffan, Qatar, in 2007. Other multinational oil companies, including Shell, Exxon, and Syntroleum, have also started to invest in Fischer-Tropsch plants in Qatar. 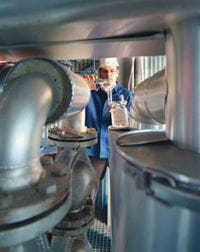 The Sasol plant uses a catalyst consisting of cobalt nanocrystals supported on an Al2O3 matrix and activated by traces of platinum. ‘The intrinsic problem with the cobalt catalyst used in these plants is its limited stability,’ explains Hans Niemantsverdriet from the Schuit Institute of Catalysis at the Technical University of Eindhoven, Netherlands. In collaboration with Sasol, Niemantsverdriet has studied spent catalyst material from the Qatar plant to work out what the problem was.

A popular hypothesis was that water – the main by-product of the Fischer-Tropsch process, and thus not avoidable – oxidised the cobalt. At the high temperatures of 230oC and moderate pressures of 20 bar typical of the process, water partial pressures reach 4 to 6 bar, which might conceivably corrode the metal. However, detailed research of Niemantsverdriet’s group using materials from the Sasol plant showed that oxidation was not the problem, and that it could be easily avoided by choosing a suitable cobalt crystal size and adjusting the partial pressures of hydrogen and water.

Recently, the group identified an unexpected reaction that appears to play an important role in catalyst deterioration, namely the accumulation of carbon species. Niemantsverdriet summarises the results: ‘The catalyst deactivates due to a number of factors: sintering, poisons, and inactive carbon formation at a very slow rate.’

At the same time, researchers at Sasol discovered a way of regenerating their catalyst, bringing it back to almost 100% of its original activity. At a recent conference on catalyst deactivation in Delft, Netherlands, says Niemantsverdriet, ‘the stability of Fischer-Tropsch catalysts was discussed in great detail. It is a hot topic.’

So far, Fischer-Tropsch production accounts for 500,000bbl/day of fuel, less than 1% of the 80m bbl/ day fuels generated from crude oil. But considering its potential to be adapted to all kinds of carbon sources, including biomass, it is likely to play a much larger role in the future. It appears that, 85 years after its invention, the ‘ersatz’ fuel of yesteryear could become the fuel of choice for a more sustainable future.