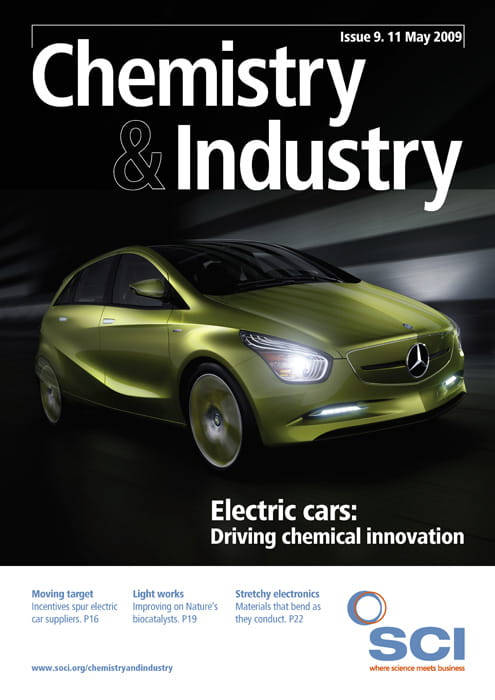 In partnership with German car maker Daimler, Evonik is developing lithium-ion batteries with a thin ceramic-coated separator between electrodes to prevent overheating. With electrolytes, companies are testing liquid organic solvents polymers and gels.

However, the battery sector is not concentrating exclusively on developing Li-ion technologies. Some companies believe that considerable improvements can still be made to NiMH batteries. High performing versions of the long-established lead acid battery are now being used in microhybrid systems for engine start-restarts, which can reduce energy consumption by up to 8%. Think Global, a Norwegian based EV manufacturer, is offering in its vehicles, in addition to Li-ion batteries, a molten salt battery made by Mes-Dea of Switzerland with two basic materials: sodium and nickel. The battery has operating temperatures of around 250–330ºC to provide a molten salt of high conductivity and hence high energy density. ‘With these batteries for automobiles the cost is not in the materials but in the time and expertise required to develop them,’ explains Katinka von der Lippe, head of design and product planning at Think Global. In the fuel cell sector, UK-based Bac2 has developed a conductive composite polymer called ElectroPhen from low-cost bulk raw materials making scale-up to mass production relatively easy and economical. The composite is being used for bipolar plates in fuel cells but the company believes it can be applied in electrical or electronic products possibly elsewhere in automobiles. The era of clean energy automobiles will provide openings for companies with innovative materials for components throughout the car, particularly because there will be new players in the sector. A big gain in market share by EVs is likely to precipitate changes in the auto supply chain. Makers of key components like batteries are already manufacturing electric vehicles themselves. There will be opportunities to create ties with new global players in the car market.
Share