The UK is the world’s largest producer of daffodil and narcissus cut flowers. The business of growing daffodils adds around £23m/year to the country’s economy, while the UK also produces about half the world’s daffodil bulbs, with exports of 10,000 tons/year worth around £7m. There are about 4,200ha of commercial production, with maybe five times this area in gardens, parks and other landscaping uses.

Daffodils flourish in Britain’s long, cool, damp spring, while neighbouring Ireland also has a long history of daffodil breeding and cut flower production and export. Growers have adopted and developed a wide range of varieties not just for flower form and colour but to control the time of flowering. Technology is in place to make cut flowers available in the UK and for export markets for six months, from roughly December to May. 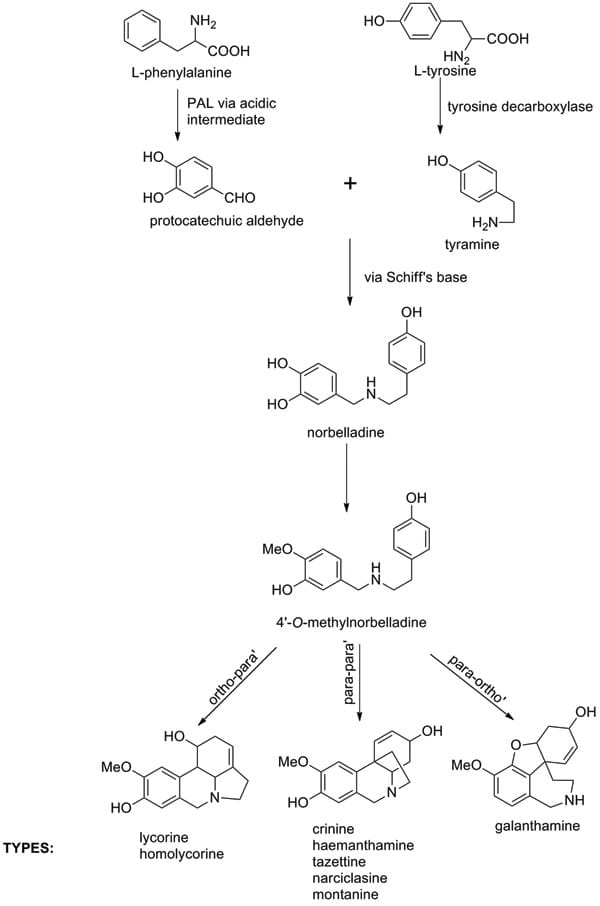 Once the flowers have appeared, the other above-ground parts of daffodils die back rapidly and the plant exists underground through summer and autumn. This is due to the daffodil’s Mediterranean heritage where there is a relatively short temperate, moist period for growth between the cool winter and hot, dry summer. This resting bulb, like other underground storage organs, could also be an attractive source of food for animals, so it is no surprise that the entire plant, from bulb to flowers, contains chemicals that make them distastefully bitter and even toxic.

Daffodil leaves and flower stalks contain crystals of calcium oxalate. This is not unexpected, since some members of almost all plant families, including many crops, synthesise oxalic acid (C2H2O4) as a normal physiological process. Oxalic acid is a strong dicarboxylic acid and the most oxidised organic compound synthesised by plants. The crystals were first seen in plant tissues by Antonie van Leeuwenhoek in the late 1600s as a consequence of his improvements to magnifying lenses. For many years they were thought to form spontaneously, but it is now apparent that the complexity of crystal formation, even extending to morphology, requires a substantial level of genetic and biochemical control.

In daffodils, bundles of needle-shaped calcium oxalate crystals termed raphides are formed. As well as being involved in controlling calcium levels in the tissues, the raphides provide some protection from grazing animals and insects. This extends to people, since an eczematous rash and sores – ‘daffodil picker’s rash – on the hands and arms are a well-documented hazard of the flower bulb industry where ‘cut’ flowers are actually plucked from the base. The rash is partly due to the raphides released into the sap that exudes from broken stems and leaves. Soluble oxalate itself is also toxic to animals through interference with calcium metabolism.

Daffodils also synthesise a wide range of isoquinoline alkaloids. The total level in the bulbs is generally 1-2%, but over 100 individual compounds have been identified among different Narcissus varieties, starting with lycorine identified from N. pseudonarcissus in 1877 by A. W. Gerrard. They are collectively termed the Amaryllidaceae alkaloids, after the taxonomic family to which Narcissus belongs, since the specific chemical structures are unique to that family.

The characteristic features fall into nine principal skeletal subgroups, all containing ring systems derived from the amino acids phenylalanine and tyrosine, and a single nitrogen atom, which can be secondary, tertiary or even quaternary (Figure 1). In addition, all are moderately weak bases (pKa 6 – 9). Biosynthetic pathways were proposed from the 1960s following radiolabelling experiments and isolation of proposed chemical intermediates (Figure 2). However, researchers have yet to isolate and study the relevant Narcissus enzymes.

The alkaloids are undoubtedly why eating all parts of daffodils can cause illness, with symptoms including vomiting, abdominal pain and diarrhoea in animals and people. Although pets and farm animals have become ill after browsing fresh daffodil leaves, it is, for example, generally safe to allow sheep to graze the grass and weeds in post-flowering daffodil fields. People have occasionally cooked and consumed the bulbs in mistake for onions despite their lack of pungency and odour, but fortunately the result is usually a short period of illness without long-term consequences.

Daffodils have been used regularly in folk and traditional medicine, for in addition to the well-documented sickness-inducing properties, extracts can produce numbness, hallucinations, convulsions and cardiac effects, as well as being used for centuries in cancer treatments. Applying juice or aqueous extracts to burns or open wounds can result in numbness and these effects explain why there has been so much interest in identifying their chemical and pharmacological bases.

Plants are important for new pharmaceuticals because of the complexity of their secondary metabolic compounds. Indeed, one third of the approximately 1000 new pharmaceuticals registered in the past 25 years originated from or were inspired by natural products. The global market in plant-derived drugs in 2008 was estimated to be worth about £12bn from both prescribed and over-the-counter sales.

The best-studied Narcissus alkaloids are lycorine, narciclasine, galanthamine and pretazettine, which have several pharmacological activities, and extraction and purification are favoured because it is challenging to synthesise in large quantities compounds with high levels of stereoselectivity.

Galanthamine, also called galantamine, marketed as Reminyl by pharma company Shire Pharmaceuticals, is particularly interesting because it is approved by the National Institute for Health and Clinical Excellence in the UK as a treatment of early stage and moderate Alzheimer’s dementia. Alzheimer’s currently affects at least 600,000 people in the UK and as many as 35m people worldwide, and incidences will increase dramatically as average life expectancies increase.

Alkaloids are of interest because people with Alzheimer’s appear to have a shortage of the neurotransmitter acetylcholine in their brains. In the 1950s, the Russian pharmacologists M. D. Mashkovsky and R. P. Kruglikova-Lvova discovered that galanthamine could competitively inhibit the enzyme acetylcholine esterase. Further work established that its action was long-acting, selective and reversible, with a number of clinical uses such as recovery from a type of curare-induced anaesthesia and, later, Alzheimer’s disease.

While the commercial opportunities are clear however – especially since patents on Reminyl have recently expired – making galanthamine synthetically is a difficult proposition. Both the number of chiral centres in the molecule and unfavourable intramolecular coupling of the phenolic rings means that synthesis of the all-laevo (L-isomer) natural form is extremely expensive and makes extraction and purification from natural plant sources very attractive.

The drug has been sourced from the Balkans using wild stocks of the plant Leucojum, but the rapidly expanding potential market means that a cultivated, rather than a wild, plant source is required to sustain production and allow strict quality control. The genus Lycoris, a small relative of the daffodil, has been collected from the wild in China and is now being multiplied and cropped there for galanthamine, but there is no history of deliberate breeding of the genus.

Enter the daffodil! A major attraction of using the genus Narcissus is the long-established horticultural expertise, particularly in the UK, while Europe is also home to many bulb-growing firms, with bulb lifting, grading, storing, treatment and planting machinery.

SME Alzeim in Brecon in mid-Wales is leading scientific work, with support from the Welsh Assembly and central governments, to develop the necessary chemical expertise. One attraction of Wales for producing alkaloids is that chemical levels can be enhanced by the stresses of growing the plants in the Welsh mountains. Studies include extensive horticultural trials to identify the most appropriate regimens for alkaloid production – such as varietal, location and climatic combinations – in collaboration with Cambridge and Bangor universities. Highly specialised fertiliser treatments as well as unique harvesting and processing equipment have been developed. Harper Adams University in Shropshire is now also involved.

The basis of agricultural growing and cropping for alkaloids has already proved to be very different from established horticultural practice. Much work has also been necessary to develop a new, wet-based industrialscale extraction process with chemical engineers at Manchester University.

Alzeim already has its own daffodil breeding programme, and is working on micropropagation so that new varieties can be readied for the field more rapidly than by traditional practices. Finally, because, as yet, little is known about the genetic control of alkaloid synthesis and production in the plant, next-generation sequencing to obtain genome-wide information on the daffodil is now under way in collaboration with colleagues at the University of Liverpool. Thus the breeding will become better directed.

The daffodil is destined to be at the centre of intense research activity in the near future in order to realise urgently needed commercial expansion of production not just for generic versions of galanthamine-based oral medicines but also for the development of other drug delivery systems and, eventually, other alkaloids that promise to be of value to medicine.

Meriel Jones and Jane Pulman are plant scientists at the Institute of Integrative Biology, University of Liverpool, UK, and Trevor Walker is research director at Alzeim in Brecon, Wales.

The genus Narcissus originates from the Mediterranean region and the Iberian Peninsula. It includes the traditional yellow daffodils with trumpet-shaped flowers and the various ‘narcissus’ types, many of which have multiple flowers on each stem. The ‘wild’ or Tenby daffodil (N. pseudonarcissus obvallaris) that is a feature of spring in the UK and inspired William Wordsworth was almost certainly introduced by the Romans. There is clearer evidence of human distribution along trade routes for one species, N. tazetta, which is wild in Spain and North Africa but also found along a narrow region leading to China and Japan.

The natural promiscuity of the various wild species makes the taxonomy of the genus difficult but there are considered to be from 40 to 80 species. In addition, hybridisation has been encouraged by people over the centuries to allow selection to produce new, attractive flowers, and there are now around 25,000 recognised varieties. These generally have larger and more robust flowers than in their corresponding wild species in many shades of yellow, white, orange and peach - sometimes `double’ or with multiple whorls of petals.

Although the indistinct speciation with many variations of the basic chromosome number of 2n=14 makes seed production very difficult, multiplication of daffodils is possible because the bulbs can be propagated vegetatively. Thus varieties are clones that maintain their genetic character, apart from the occasional `sport’, without the time-consuming need to try to develop true-breeding seeds.