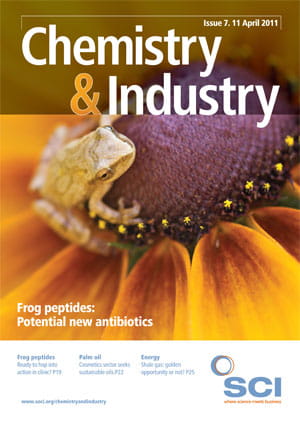 With conventional natural gas reserves declining, shale gas is increasingly portrayed as a significant new energy source. In the US, a shale gas boom has seen production reach 14% of total gas supply in 2009, according to the Energy Information Administration,1 and is predicted to reach 45% in 2035. But this ‘revolution’ has generated claims of environmental pollution and bad practice. 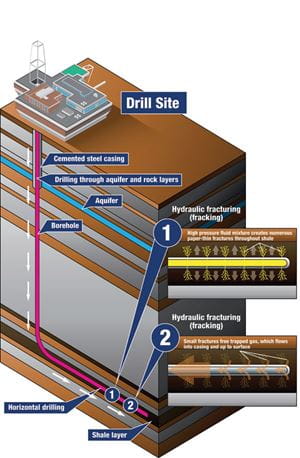 Now the UK faces a debate, too, over whether it should be exploring and exploiting shale gas reserves. Advantages include reduced reliance on energy imports and cleaner alternatives for more carbon-intensive fuels like coal in electricity generation. But will extraction contaminate water supplies and redirect substantial investment away from renewable energies?

In January 2011, this debate was fuelled by a report from the Tyndall Centre at the University of Manchester2 that called for a moratorium on shale gas development until the extraction process is better understood.

‘If we are serious about avoiding dangerous climate change, the only safe place for shale gas remains in the ground,’ states lead author Kevin Anderson. ‘In an energy hungry world, any new fossil fuel resource will only lead to additional carbon emissions. In the case of shale gas, there is also a significant risk its use will delay the introduction of renewable energy alternatives.’

The Tyndall report was commissioned by The Co-operative Group, an institutional investor in oil firms. It agrees that firms should not invest in shale gas until further studies have been carried out. The Co-operative Group is concerned that the UK Department of Energy and Climate Change (Decc) pronounced shale gas safe before the end of an ongoing consultation into the technology by MPs on the UK House of Commons energy and climate change select committee.

UK authorities have already approved the first test sites. Cuadrilla Resources began drilling in January 2011 at two sites in the Bowland Basin, Lancashire, and plans to drill at two other sites there this summer. Production could begin by 2013 if it finds ‘substantial’ amounts of extractable gas, licences permitting.

So what is shale gas? Shale gas is natural gas – primarily methane together with other hydrocarbons such as ethane – produced from organic-rich shales. Whereas conventional gas is found in reservoirs in porous rocks like sandstones and limestones, shale gas is found within the source rocks themselves, trapped tightly within fractures and micro-pores, and adsorbed onto organic matter. Areas of potential in the UK include the Upper Bowland Shale of the Pennine Basin, the Kimmeridge Clay of the Weald Basin and the Lias of the Weald Basin.

Only relatively recently have engineers combined existing technologies of horizontal drilling and ‘artificial fracturing’ to make shale gas extraction commercially viable. Fracturing has been used in the petroleum industry for decades, but until recently it was too expensive to use in shale gas wells.

In artificial fracturing, also called hydraulic fracturing or fracing, fluid is pumped into the ground to create fractures that make the rock more permeable. These fractures are propped open by small particles, allowing the released gas to flow at commercial rates. Boreholes are often drilled horizontally with lateral lengths of more than 3000m within the shale to create maximum borehole surface area in contact with the shale. Fracing usually takes place a couple of months after drilling.

Cuadrilla uses fluid that is a minimum of 99.75% water and sand, explains Cuadrilla’s ceo Mark Miller. The remainder contains potentially three additional ingredients: a friction reducer called polyacrylamide, found in facial creams, soil sealants and contact lenses; a very low concentration biocide; and weak hydrochloric acid, sometimes used in swimming pools and also as the food additive E507. ‘The biocide will be used only if the domestic water [from United Utilities] is not pure enough,’ says Miller. ‘The acid will be used, if needed, to help open the perforations to initiate frac fluid injection.’

It is still early days for the UK. The government granted only three licences for shale gas exploration in the last licensing round in 2008. But interest is expected to be high for the next licensing round this year.

Unconventional gas in the US has played a major role in reducing imports of liquefied natural gas and increasing security of supply. A ‘shale gas revolution’ has resulted in a 20-fold increase in unconventional gas production in the US over the last decade, says Paul Stevens, senior research fellow at Chatham House. But, in his report published in September 2010,3 Stevens questions whether this revolution can spread beyond the US, or indeed be maintained within it.

Stevens concludes that the shale gas boom is creating huge investor uncertainties for international gas markets and renewables. And he casts serious doubt over industry confidence in the new fuel. Investor uncertainty generates two major problems, he warns: investment in future gas supplies will fall and investment in renewables is likely to suffer.

‘If the shale gas revolution in the US continues to flourish and is replicated elsewhere in the world, this inadequate level of investment will not matter,’ says Stevens. ‘Consumers can look forward to a future, floating on unlimited clouds of cheap gas as unconventional gas is produced. However, if shale gas fails to deliver on current expectations, then in ten years or so, gas supplies could face serious constraints.’

Meanwhile, energy companies like Cuadrilla are keen to promote the positives. It claims that shale gas would ensure energy security by providing new domestic supplies; lower energy cost and price volatility; and, like all natural gas, halve greenhouse gas emissions if burned to create electricity, instead of coal. ‘By being a first mover in shale gas, the UK could be at the forefront of a potentially significant new European energy industry, bringing multiple economic benefits,’ says Miller.

There are shale deposits all over the world and geologists expect reserves to be found in many countries, although it’s not clear yet how much will be commercially viable. Miller reports that, in the last 12 months, there has been an increase in shale gas exploration in France, Germany, Poland, Hungary and the Czech Republic.

Manouchehr Takin, from the Centre for Global Energy Studies (CEGS) in London, adds Argentina, Canada, China, the Ukraine, Sweden and India to this list. But he sounds a note of caution: ‘In the US, shale gas is currently a victim of its own success; so much has been produced that gas prices have dropped to a point where it’s no longer economic.’

The Tyndall report lists groundwater pollution, surface pollution and excessive water consumption as the main risks associated with drilling for shale gas. It says 58 of 260 substances listed in a database of fracing fluid additives have one or more concerning properties. Groundwater pollution can occur if the wellbore fails or leaks. The report details several ‘documented incidents’ in the US, mainly due to construction faults and/or operator error, which caused high levels of pollutants, such as benzene, iron and manganese, in groundwater and a number of explosions resulting from gas accumulating in groundwater.

‘Flowback fluid’ can also cause surface pollution, according to the report. When drillers plunge through aquifers, they must seal the borehole so water doesn’t leak in and waste doesn’t leak out. Some of the frac water injected into the well gets absorbed by the shale, but, if the borehole is not sealed properly, some water ‘burps’ back. This flowback is classed as hazardous waste.

However, in recent months US producers have comprehensively rebutted all claims of contamination of drinking water. In fact, they claim there has never been a documented instance of water contamination caused by hydraulic fracing.

However, authorities in New York state have banned drilling for shale gas while they investigate claims that operators have contaminated shallow aquifers. The US Environmental Protection Agency (EPA) is to report on the potential impact of hydraulic fracing on drinking water, human health and the environment in 2012.

On the other side of the Atlantic, the European Commission is to clarify whether existing environmental legislation covers drilling for shale gas.

Industry, too, vigorously denies that shale gas is unsafe and blames pollution incidents in the US on bad practice. Miller insists that potential risks are common to all hydrocarbon exploration. Directional drilling and artificial fracturing have been used for decades, he says. And he claims that US regulators haven’t confirmed any cases of hydrocarbons or frac fluid leaking into shallow water aquifers.

Miller points out the few additives employed in the Cuadrilla process are in common use and the biocide would only be added if water supplies weren’t pure enough. In addition, he says, Cuadrilla’s well-design includes multiple piping and cement layers even though the fracing process takes place at depths greater than 1500m, thousands of metres below shallow water aquifers containing water used by humans, animals and vegetation.

In its evidence to the Commons committee, the UK Environment Agency notes that sophisticated geophysical methods can target and control fracing and can detect installation problems. Cuadrilla did not require a permit for its Lancashire operations because there are no vulnerable aquifers nearby and the shale rock is very impermeable, it explains.

Similarly, Decc told the committee that potential risks should be no more than those associated with drilling for any other hydrocarbons by a borehole. If needed, it says well sections would be encased in steel and cement to protect aquifers, but UK shale typically lies significantly deeper than nearby aquifers, so substantially reducing contamination risks.

So should the UK be developing its shale gas resources? Dick Selley, a petroleum geologist at Imperial College, London, believes so. ‘If we wish to continue using energy at present rates we are going to have to go nuclear. Renewables cannot fill the gap as petroleum declines. It will take years to have sufficient nuclear power on stream. North Sea production is in decline. The UK will become increasingly reliant on overseas supplies from Russia and the Middle East. The UK is very vulnerable. For security reasons, we need to have our own indigenous energy supply.’

CGES’ Manouchehr Takin also thinks shale gas can contribute to the global energy supply and argues against an exploration ban. He also disagrees that investment will be diverted away from renewables, saying that it is a different set of investors who put money into renewables.

Takin concludes: ‘Shale gas is a controversial issue, which has generated many emotional opinions. There are some potential risks, but I see shale gas extraction as a positive development. And let’s not forget that the success of shale gas has been a major technological breakthrough, cleverly combining a number of techniques. We will see which side is right in 10–20 years’ time.’

Maria Burke is a science writer based in St Albans, UK.