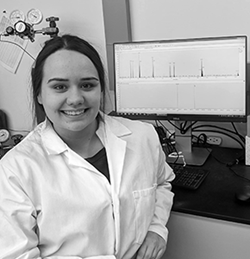 Cassandra Johannessen is a 2020 Canada Student Merit Award winner. She achieved this award for obtaining the highest standing of her class in the fourth and final year of her degree. Here is a brief biography of the winner.

Cassandra is an NSERC Canadian Graduate Scholarship (CGS-M) funded accelerated master’s student at Trent University studying the behaviour and fate of a class of novel environmental contaminants that originate from tire wear, using computational modelling and analytical chemistry techniques. She is co-supervised by Dr. Mark Parnis and Dr. Chris Metcalfe.

In 2020, she received a Bachelors of Science degree in Honours Chemistry and obtained an overall average of 95% in the program. Throughout her time at Trent University, Cassandra has garnered experience working with a variety of different analytical techniques including GC-MS and LC-HRMS.

During her summers as an NSERC funded undergraduate student researcher, she contributed to multiple projects surrounding the extraction quantification of organic contaminants in the aquatic environment using both non-targeted and targeted techniques. One of her main projects involved performing forensic source identification on parent and alkylated polycyclic aromatic hydrocarbons (PAHs) in sediments from a contaminated harbor in the Laurentian Great Lake. This work was published in Environmental Pollution. She also has a keen interest in micro- and nanoplastic contaminants and authored a review on the subject.

Cassandra has also taken an active role in education at Trent as both an academic assistant and tutorial coordinator for first year chemistry courses and third year computational chemistry. She is also an executive member of the Ontario Tech-Trent Working for Inclusivity in Chemistry group and an administrative officer for the Trent Graduate Students in Science Symposium.

Some of the academic distinctions she has received include the Governor General’s Bronze Medal, the Canadian Society for Chemistry Silver Medal, two Undergraduate Student Research Awards (USRA) from NSERC, the Ontario Graduate Scholarship, the NSERC Canada Graduate Scholarships, and the R & R Laboratories Prize in Analytical Chemistry. Cassandra plans on continuing her research and pursuing a fulfilling career in environmental chemistry.