A new platinum (Pt) catalyst can break one of the strongest chemical bonds known – the carbon-fluorine bond – which could lead to breakthroughs in chemical synthesis and environmental pollution clean-up.
Georgina Hines

A group of researchers from Yale University and the US Department of Energy’s Brookhaven Laboratory have discovered that single atoms of Pt can be used as an effective catalyst for breaking carbon-fluorine bonds.

‘We aimed to develop a technology that could degrade polyfluoroalkyl substances (PFAS), one of the most challenging pollution remediation problems of the present day,’ said Jaehong Kim, Professor of Chemical & Environmental Engineering at Yale.

PFAS are a group of chemically manufactured compounds commonly found in consumer and industrial products – ranging from Teflon to clothing. They include carbon-fluorine bonds which make them resistant to breakdown in the environment, causing environmental pollution.

‘PFAS are widely detected all over the world, from Arctic biota to the human body, and concentrations in contaminated groundwater significantly exceed he regulatory limit in many areas,’ said Kim. ‘Currently, there are no energy-efficient methods to destroy these contaminants.’

The efficiency of catalysts improves as they are broken down, but as it becomes a nanomaterial they tend not behave in the same way.

‘The only part of a catalyst that is reactive is its surface,’ said Eli Stavitski from Brookhaven. ‘So, if you break a catalyst down into small pieces, you increase its surface area and expose more of the catalyst’s reactive properties.’

Therefore, when using single atom catalysts, scientists must create a balance for the strong, reactive metal in a stable environment.

The team used an advanced transmission electron microscope (TEM) to view the Pt atoms at nanoscale on a silicon carbide support. 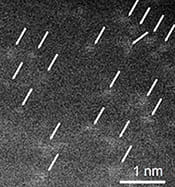 ‘First, we bind metals to anchor sites on a support material, then we photoreduce the metals to single atoms under mild UV-C irradiation,’ said Kim, explaining the process. ‘Using this method, our group has been synthesising a suite of single-atom catalysts involving various metals – platinum, palladium and cobalt – and supports – silicon carbide, carbon nitride and titanium dioxide – for numerous catalytic reactions.

‘In this work, we found single Pt atoms loaded onto silicon carbide to be strikingly effective in catalysing carbon-fluoride bond cleavage and breaking down contaminants like PFAS.’

An Inner-Shell Spectroscopy (ISS) beamline technique was used to analyse the catalyst in its broader environment and to see how it interacted with light so the scientists could see how the catalyst was made.

Now, the team at Vale and Brookhaven are working to apply their research to address environmental challenges, including pollution caused by PFAS.