The Sir Eric Rideal Lecture is awarded to an individual in recognition of their commitment to and significant impact on colloid and interface science in the UK throughout their professional career. This life-time achievement award was first introduced in 1970 and is named after Sir Eric Rideal, who is known for the Eley-Rideal mechanism and was a long-standing SCI member.

The 2019 Lecture was awarded to Professor Peter Lovell from the University of Manchester, whose research covers polymers, composites and emulsion. Professor Lovell is well-known for his co-edited book ‘Emulsion Polymerization and Emulsion Polymers’ which is considered a ‘bible’ within his field. He is also a co-author on a best-selling and world-leading introductory textbook to polymer science, which has more than 2000 citations. Peter has also had six patents, all of which are now used in products.

‘As with all of its awards, the members of the committees of SCI’s Colloid and Surface Chemistry group (CSCG) and RSC’s Colloid and Interface Science group (CISG) voted for their top choice,’ said Chris Blanford, from the event’s organising committee. ‘Professor Lovell had a majority after the first round of voting.’

To celebrate, a one-day symposium took place at SCI HQ in London on 12 April 2019. The day featured six speakers – all of whom are previous colleagues and friends of Professor Lovell’s – and concluded with the awardee’s lecture ‘Polymer colloids research – A captivating fascination’.

Professor Brian Saunders from the University of Manchester began the series of talks by discussing Au-acrylic core-shell nanoparticle systems for applications such as in vivo imaging.

Professor of Soft Matter Physics Joseph Keddie, from the University of Surrey, followed this with a talk about the drying behaviour of colloidal polymers for the manufacturing of pressure-sensitive adhesives (PSAs). 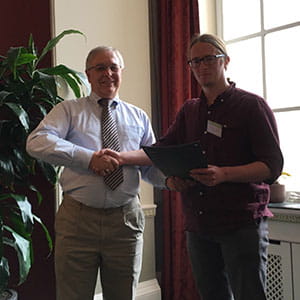 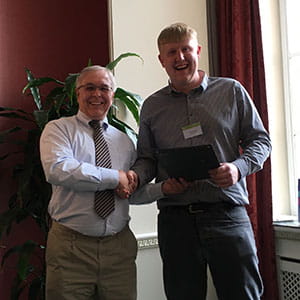 A judging session of the posters then took place and the prizes were awarded to Samuel Wilson-Whitford (Soft Matter Prize) and Matthew McDonald (Polymer Chemistry Prize), both from Professor Stefan Bon’s research group at Warwick University.

Professor Katharina Landsfester from the Max Planck Institute for Polymer Research explained microemulsions and nanocarriers in the context of biomedicine and Professor Steve Armes of the University of Sheffield followed with his research around the platform technology polymerisation-induced self-assembly (PISA), with reference to small-angle X-ray scattering.

Dr Neal Williams from AkzoNobel then presented his work on the transition from solvent-borne to water-borne paint coatings comprising hybrid polymer colloids, which are safer and greener to use.

The final speaker preceding the Rideal Lecture was Professor Alex van Herk from the Institute of Chemical and Engineering Sciences, Singapore, who reported research on volatile organic compound (VOC) free paints to coat buildings with the aim of reducing ambient temperatures.

Upon starting his lecture, the awardee expressed how he is ‘extremely honoured and privileged’ to be receiving this award, adding that it is ‘particularly humbling to have been chosen considering previous recipients such as Sir Harry Melville (1976), Ron Ottewill (1985), Sir Sam Edwards (1990) and Brian Vincent (1997)’.

Professor Lovell’s fascination with colloid and interface science started during his BSc in Polymer Science and Technology (Chemistry) in 1977. Due to his passion for polymers, he aimed to work in the coatings industry, but instead an unexpected sequence of circumstances led him to take up a teaching position at UMIST, which allowed him time to do PhD research in the field of high-temperature resistant polymers.

In 1981, Peter went on to work in the photographic industry for Ilford Ltd, where he spent most of his time running the polymer science research group, developing polymers for use in aqueous-based gelatin coating solutions.

Following this, in 1984, he returned to UMIST as a lecturer, where his early research focused on structured particles and improving the performance of PSAs. The studies of PSAs led to extensive research on chain transfer to polymer in emulsion polymerisation, both in terms of branching and its contribution to control of soft polymer properties, as well as to the grafting of water-soluble polymers to particle surfaces.

He noted that his research interests are ‘always directed to end applications of polymers’ and went on to describe several other areas of research, including click-coupling to particle surfaces. 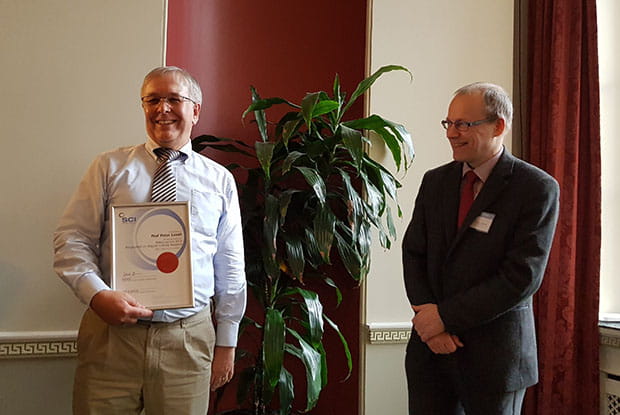 Speakers said it was an ‘absolute pleasure’ to celebrate a dear colleague. One spoke of Peter’s work, highlighting how his work has been ‘absolutely instrumental’ in this field. It was remarked by one of Professor Lovell’s colleagues that you don’t get anywhere in this career without the support from people like Peter.