Graphene could be used to build quantum computers

Researchers have made developments with graphene that could lead to its future use in quantum computing.
Cassie Sims

Quantum computing is becoming a reality and is a technology that was once described as futuristic, but is now closer than ever to making its way into our everyday like. This type of computing is significantly faster than the computing we currently use, and although it might be overkill for everyday tasks, this supercomputing power could be used widely across the chemical industry – from drug design to modelling, and even in the stock markets for financial analysis.

Quantum computers work on the same principles as the standard everyday computer, however, instead of using binary coding with 0s and 1s, these super-powerful computers use a quantum bit – known as a 'qubit’ – something which can exist in one of two states.

The big difference between standard binary and the use of qubits, is that qubits can take on a superposition of both states at the same time. This super positioning significantly increases computing power, allowing advance calculations to be done in a fraction of the time of even the most powerful computers we currently have.

The qubit can only exhibit this superposition state for a short period of time, and currently this is the biggest limiting factor in quantum computer design. This time – known as ‘coherence time’ – can be impacted by changes in the surrounding environment. The perfect qubit will have a long coherence time, allowing it to stay in the superposition for longer. It would also be more stable in different environments, making it more practical for use in every-day computing. 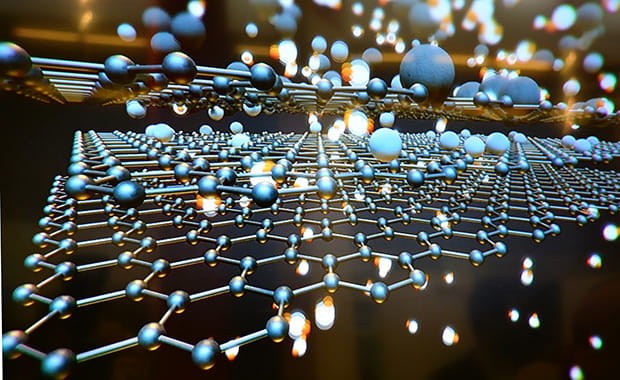 Graphene's structure consists of 2D sheets of carbon molecules that are arranged in a honeycomb pattern.

Australian materials company Archer Exploration’s mission is to revolutionise global industries using novel solutions with currently existing materials. This includes taking on the challenge of quantum computing, where they hope to develop fundamental components for scalable, commercial use.

‘There is a need within the quantum computing market to develop componentry that can be integrated into electronic circuitry while remaining functional at room temperature, allowing practical non-disruptive solutions that could facilitate the wide-scale point-of-use by consumers,’said Dr Mohammad Choucair, CEO of Archer Exploration.

Scientists working with graphene have found a way to use it in quantum computers. This new technology might make graphene a strong contender for a material in the world of quantum computing and we could see graphene-based technology appearing in our computers soon.

Graphene is a 2D molecular structure made from carbon that was first discovered in 2004 by researchers at the University of Manchester, UK. Now, its unique structure makes it extremely strong as well as a good conductor of heat and electricity. Researchers at MIT, US, have found a way to turn graphene into qubits for quantum computers.

'Our motivation is to use the unique properties of graphene to improve the performance of superconducting qubits,’ said Joel I-Jan Wang, a postdoc at MIT. ‘In this work, we show for the first time that a superconducting qubit made from graphene is temporally quantum coherent, a key requisite for building more sophisticated quantum circuits.’

The scientists believe this technology could be used in quantum computing in realistic conditions due to the long coherence time of 55ns. ‘Ours is the first device to show a measurable coherence time – a primary metric of a qubit – that’s long enough for humans to control,’ said Wang.

The qubit is made of graphene and another material known as a ‘van der Waals’ material – atom-thick materials that are easy to stack in layers. The van der Waals material, hexagonal boron nitride (hBN), was used to sandwich a sheet of graphene. This creates a perfectly smooth casing to protect the graphene system and allow electrons to move freely.

The researchers will now work on scaling their qubit design and improving the coherence time to match conventional qubits which hold promise for practical application.