What's it like working at Diamond Light Source? An SCI Scholar explains...

A catalyst is a substance that reduces the energy input required for a reaction – many industrial processes use a catalyst to make them feasible and economic.

There are many types of catalysts for different applications, and zeolite catalysts are used commercially to reduce the negative effects of exhaust fumes from diesel engines and produce fuels more efficiently. Catalysts can be studied with light, in a process called spectroscopy, to help understand how they work.

My PhD research has greatly benefitted from the use of synchrotron radiation. It helped me to gain detailed mechanistic insight into how the zeolite catalyst works. To date, I have completed four scientific visits at the Diamond Light Source, which is the UK’s national synchrotron facility, located in Oxfordshire.

Diamond Light Source is the UK’s national synchrotron science facility, located in Oxfordshire. It was opened in June 2014 to support industrial and academic research.

What is a synchrotron?

A synchrotron generates very bright beams of light by accelerating electrons close to the speed of light and bending them through multiple magnets. The broad spectrum of light produced, ranging from X-rays to infrared (IR) light, is selectively filtered at the experimental laboratories (beamlines), where a specific region of the electromagnetic spectrum is utilised. My work uses the IR part of the electromagnetic spectrum. IR light has the right energy to probe bond stretches and deformations, allowing molecular observations and determination.

A highlight from last year has been attending a joint beamtime session with Prof Russell Howe and Prof Paul Wright at Diamond's IR beamline (MIRIAM, B22). The MIRIAM beamline is managed by Dr Gianfelice Cinque and Dr Mark Frogley.

The synchrotron enables us to capture the catalyst in action during the methanol to hydrocarbons reaction. The changes in the zeolite hydroxyl stretches we observe correlate with the detection of the first hydrocarbon species downstream. 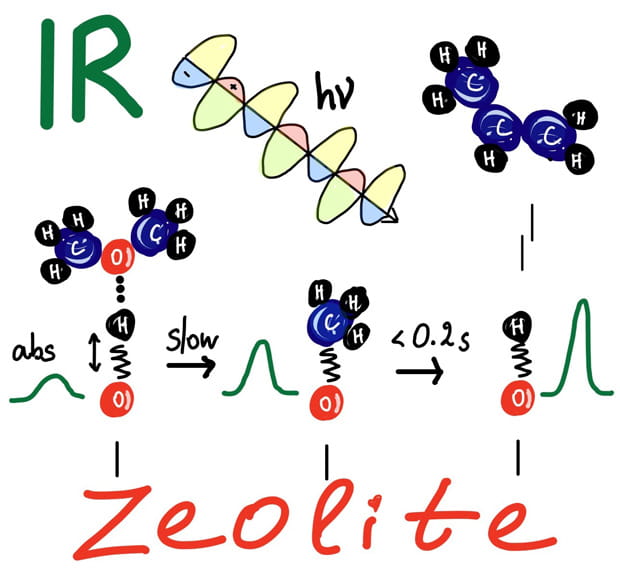 A cartoon illustration of the evolution of the zeolite hydroxyl stretch band during the methanol to hydrocarbons process.

My access to Diamond is typically spread over six-month intervals. To secure beamtime, we have to submit a two-page research proposal. This is assessed by a scientific peer review panel and allocated three or four days to complete the proposed experiments.

One of the best things about carrying out research at Diamond is working as part of a team. Because of the cost of maintaining the facility, we have to work in shifts around the clock. It takes a team effort to complete the night shifts, but the insight we can gain is very rewarding.

As you may have guessed, we collect a lot of data, which requires specialist analysis and various software packages. Through detailed analysis, we can obtain time-resolved trends and draw conclusions on crystal size effects.

Presenting at the UK Catalysis conference in Loughborough, January 2018.

I have presented these findings at the UK Catalysis conference in Loughborough and the international congress on operando spectroscopy in Malaga, Spain (operando is a term used to emphasise spectroscopic studies carried under realistic reaction conditions while detecting catalytic activity and selectivity).

What is the next step for this research?

My goal is to complete an industrial placement during the third year of my PhD, which is a key requirement as part of the Centre for Doctoral Training in Critical Resource Catalysis (CRITICAT), which I am part of, at the University of St Andrews.

Recently, I was awarded an SCI scholarship funded by the Messel's trust. This will support me as I move towards my next career step, and I seek to apply my research findings to help industry design improved catalysts.