With a rapidly increasing population, the world is struggling to meet the demand for food, water, energy, and medicine. In 2011, the global population reached 7bn – approximately the amount of grains of sand you can fit it a post box, says Sir Martyn Poliakoff – and this number has since increased.

On Wednesday 25 April 2018 at his Public Evening Lecture, Sir Martyn discussed the role of photochemistry – the study of light’s effects on chemical reactions – in creating a greener and more sustainable society as essential resources deplete.

‘Chemists have to help address the sustainability challenges facing our society,’ he said. His research group at the University of Nottingham is proving that photochemistry can make an impact.

There are 1.3bn individuals in the world who are considered ‘profoundly’ poor. To define this Sir Martyn illustrated the profoundly poor ‘can, in their head, list everything they own’.

Today, there are more people worldwide that use mobile phones than toothbrushes. As no one wants to consume less, he asked: ‘Can we provide more for the poor without robbing the rich?’

This question provides an opportunity for chemists to develop more efficient ways to use our resources by making more product from the same amount of feedstock.

Sustainable chemistry entertainingly explained using red wine, toothbrushes, mobile phones and milking a cow! It can only be Martyn Poliakoff at #SCIPEL - thanks to @SCIupdate

Sir Martyn’s lecture was inspired by Italian scientist Giacomo Ciamician’s paper, ‘The future of photochemistry’, published in 1912 in Science. Ciamician posited that photochemistry could help industry.

‘I believe that industry will do well in using from this very day all the energies that nature puts at its disposal,’ it reads. ‘So far, human civilisation has made use almost exclusively of fossil solar energy. Would it not be advantageous to make better use of radiant energy?’ 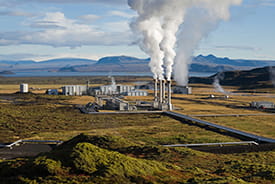 While fossil fuels are depleting, solar energy will not run out on the timescales that the chemical industry or humanity considers.

One of the special characteristics of light is that it is able to excite molecules selectively to create energy. This is the opposite to the heat created by burning coal and gas, where each of the molecules in the reaction mixture absorbs energy from the heat. Because of this, scientists are able to manipulate light to promote specific chemical transformations that can create cleaner processes.

Sir Martyn said that while there is a ‘huge body’ of research to support the use of photochemistry, the work has struggled to transition into industry and is not used regularly in manufacturing processes.

‘The big problem is that when using photochemistry, molecules need to absorb light to react. But with a big vessel, needed when you want to manufacture on a large scale, the light will not penetrate easily to the middle,’ said Sir Martyn.

However, continuous flow chemistry and supercritical fluids (SCFs) may solve this problem. SCFs are compressed gases that, above a certain pressure, are almost as dense as a liquid – existing outside the distinct gas and liquid phases. This attribute means that SCFs can dissolve liquids as solubility increases with pressure.

After a New Scientist article, ‘Solvents get the big squeeze’, was published in 1994 quoting Sir Martyn’s work on photochemistry and supercritical fluids, then Managing Director of the eponymous company Thomas Swan expressed interest in supporting an industry collaboration.

The result? A scCO2 chemical plant that achieved the continuous hydrogenation of organic compounds. The multipurpose plant was able to produce 1000 tonnes of product annually.

When treated with hydrogen, double and triple bonds in compounds become saturated with hydrogen molecules. This raises the compound’s melting point, making it easier to create a range of saturated compounds. Because of this, finding a sustainable hydrogenation process is extremely important for industry.

Unfortunately, despite its technical success, the project was energy-intensive (as with most large-scale reactors) and the reactor is no longer active.

Following his first collaboration with Thomas Swan, Sir Martyn started his search for a new project. His colleague Prof Mike George expressed his interest in applying photochemistry to the manufacture of the anti-malarial drug artemisinin. 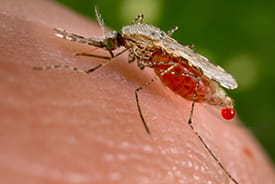 Malaria is commonly transmitted by the Anopheles mosquito. Image: CDC

Artemisinin is one of the best treatments for malaria, but its current production has its challenges, said Sir Martyn. The antimalarial is isolated from Artemisia annua, a common type of wormwood that grows in warmer climates in Asia – a process that can take months.

Inspired by the first continuous flow process for the synthesis of artemisinin – developed by researchers at the Max‐Planck Institute for Colloids and Interfaces, Germany, in 2012 – Sir Martyn and his team in Nottingham applied their knowledge of scCO2 to the method.

The resulting two-step process – using visible light and then an acid – produced a 65% yield. Not yet satisfied with the result, the team developed a dual-function catalyst that could carry out both steps simultaneously. The reaction was carried out in ethanol and water, the latter then evaporated to precipitate pure artemisinin.

While the process is still in early development, it shows promise, and could potentially significantly reduce costs and the timescale needed to produce the antimalarial.

This Public Evening Lecture was dedicated to Sir Martyn’s long-time collaborator and former SCI President, Thomas Swan, who sadly passed away on 20 January 2018.

Thomas’ son, Harry Swan, who has been Managing Director of Thomas Swan since 2006, was the evening’s compere, and was grateful for Sir Martyn’s thoughtful tribute.

Can climate affect stability of virus that causes COVID-19?