While the second half of the 20th Century saw unprecedented scientific and technological progress, a consequence of vastly increased longevity and reduced infant mortality has been a factor of three increase in world population, putting enormous strain on natural resources. By 2022, the global population is predicted to reach 8 billion.

As a result of the increasing population and its growing wealth, fossil fuel consumption, water consumption, land use (and, ultimately, soil degradation) have intensified. ‘More land was converted to crop land in the 30 years after 1950 than in the 150 years between 1700 and 1850,’ Sir John demonstrated. 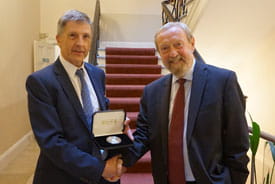 Left: Sir John Beddington was awarded the Sydney Andrew Medal before the lecture.

54% of the world’s population today lives in urban areas, with 33% of those in slums. ‘In Africa, there will be a thousand cities larger than Aberdeen in the next 15 years,’ Sir John said, directing the point to attendees of the lecture’s live stream at the University of Aberdeen.

Urban sprawl, he said, is a phenomenon we must avoid as the majority of the population moves into cities over the coming decades. Sir John illustrated this point by comparing Atlanta, which has a population of 2.5 million and an urban area of 4,280km2, and Barcelona, whose population is 2.8 million, but whose urban area covers just 162km2. The Spanish city’s residents account for 0.7 tonnes of CO2 per person through transport emissions, while Atlantans are responsible for more than 10 times as much. It is not just population size that defines emissions, but urban design.

‘This is really where the science comes in – we need to be thinking about increasing land use, increasing yields, whether that is by genetic or agronomic interventions. We need to be thinking about increasing the frequency of cropping – but the worry about this is that agriculture accounts for about 70% of all freshwater use, so there are real limits to that given the problems with water shortages,' he said. ‘But there are some things that can be addressed – 30% of the food produced globally is wasted […] partly it is waste due to pests and diseases in the developing world, and consumer waste in high-income waste.’

Sir John cited the development of resistant antibiotics as another key challenge, as the speed of resistance now vastly outpaces the development of new drugs. ‘I actually think that society, science and engineering, and sensible politicians, can actually address some of these issues – I don’t think they’re insoluble. But some of the things that are coming from politicians are essentially a complete politicisation of the scientific process,’ Sir John warned. He closed with a quote from Steven Chu, US Secretary of Energy from 2009–13. ‘People are entitled to their own opinions, but they are not entitled to their own facts.’